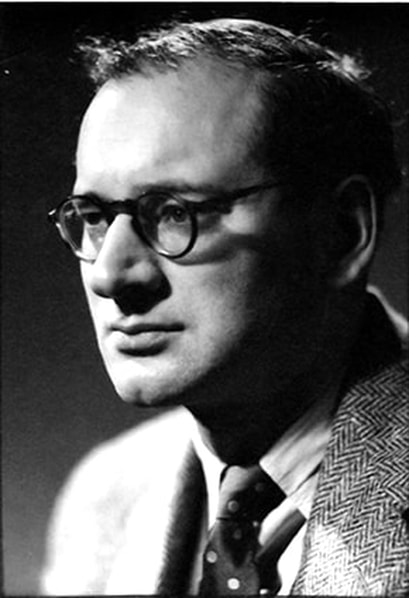 Ralph Alexander Leigh was born in Hackney and grew up in Poplar, Tower Hamlets, London. His father, Alexander Lubotsky, was an impoverished Jewish tailor from Lithuania and his mother died tragically when he was nine. He won a scholarship to Raine's Foundation School for Boys and then won Drapers' Company and London County Council scholarships to study French at Queen Mary College, London University. At the age of nineteen he changed his name by deed poll to Leigh. By the time he graduated, he had already developed an interest in Jean-Jacques Rousseau and further scholarships enabled him to continue his studies at the University of Paris from 1937 to 1939 where he met Edith Kern, his future wife. During the Second World War he worked in Intelligence, attaining the rank of major and for a year after the war he was posted to Germany. In the 1940s he started the extensive and remarkable collection of eighteenth century books which is now housed in the ‘Leigh Room’ in the Cambridge University Library. In 1945 he and Edith were married.
In 1946 Leigh was appointed lecturer in French at the University of Edinburgh and in 1952, Fellow of Trinity College Cambridge and as a university lecturer in French. In 1973 he was made a Professor. Following Edith’s death in 1972, he moved into Trinity College, which was to be his home until his death from a heart attack in 1987. Amongst the many honours conferred on him were a CBE in 1977 and the Légion d'honneur in 1979.
Leigh was the sole editor of the Correspondance complète de Jean-Jacques Rousseau (53 vols.,1965-98). In his lifetime he completed 49 of these volumes and the remaining four, consisting of the index and bibliography, were produced by a team of colleagues after his death. This outstanding work of scholarship won Leigh world-wide recognition as the expert on Jean-Jacques Rousseau.
He loved music and art and wrote poetry throughout his life. He died in Cambridge and was buried in Trumpington cemetery with Edith.

Translation of writing in Latin on the brass plaque commemorating Ralph Alexander Leigh in Trinity College Chapel.
Ralph Alexander Leigh was Lecturer, Praelector, and for thirty-six years Fellow of the College, and Professor of French Literature in the University. A man pre-eminent in the intellect, eloquence and erudition, he compiled a learned stock of annotations to the collected correspondence of Jean-Jacques Rousseau, bringing to that obscure mind his own enlightenment. He died suddenly at the age of seventy-two in 1987, just as he was about to put the finishing touches to this massive work.